Cavaliers are delightful toy spaniels, very popular in England but not as well known in the U.S.  These attractive small dogs (13-18 lbs.) are intelligent, charming, affectionate companions, easily adaptable to life in an apartment or in country. Loyal, loving, alert lap dogs, they also retain the character of sporting dogs.  They are physically quite hardy and have a surprising amount of stamina.  The Cavalier is well suited as a family dog and has four color variations…Blenheim (red & white), Ruby (all red), Tri-color (red, white & black) and Black & Tan. 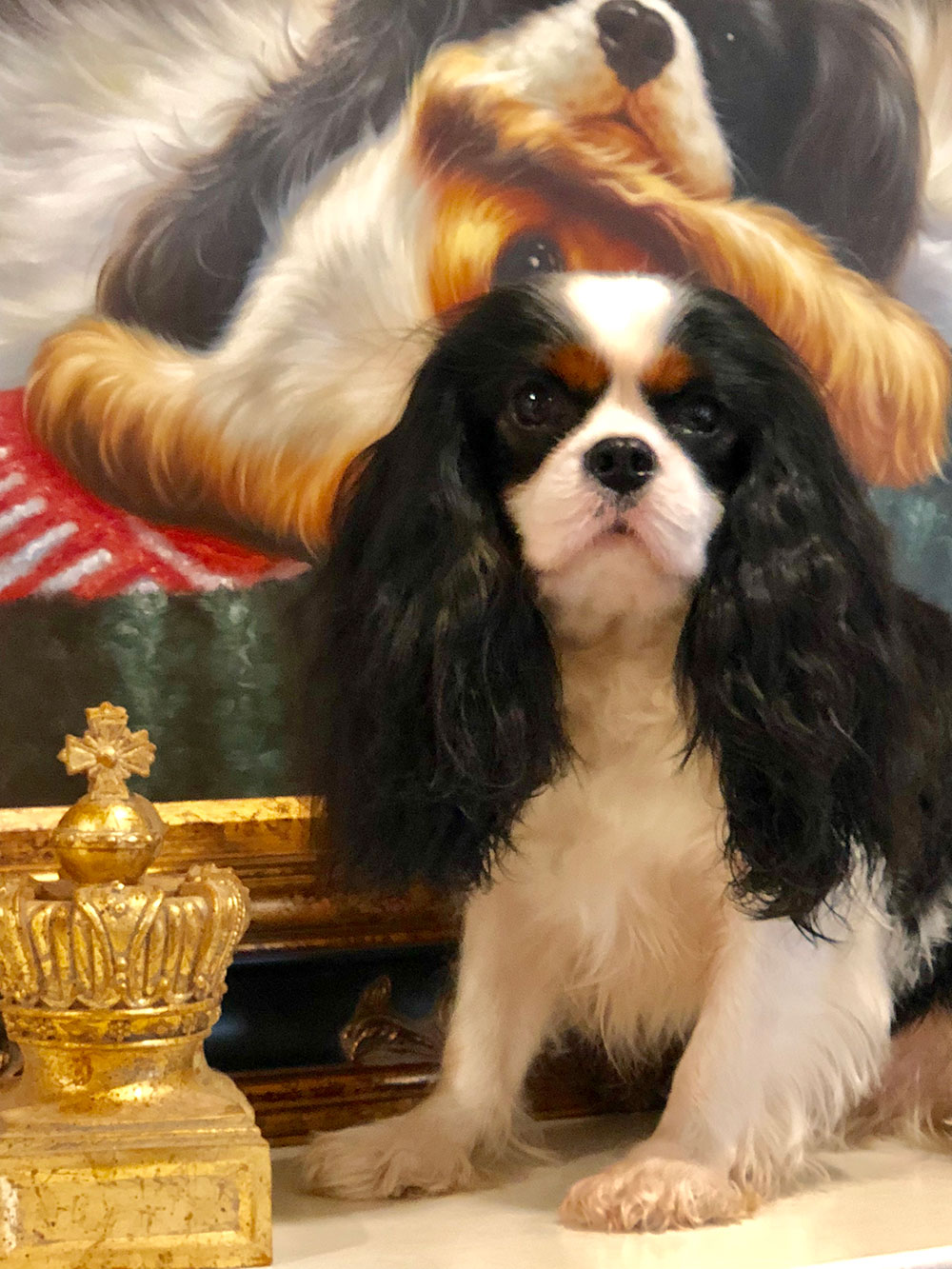 The Cavalier King Charles Spaniel is descended from the small Comforter Spaniel of the 16th Century.  Useful as companions to court ladies who needed a confidant, ornament, hot-water bottle and flea catcher, Toy Spaniels were quite common as pets of the Aristocracy on the Continent and in England during the reign of the Tudors.

It was under the Stuarts, however, that they were given the royal title King Charles Spaniels.  When William and Mary became co-regents of England, the favored pug eclipsed the spaniels’ popularity for some years.  One exception was the strain of red and white spaniels bred at Blenheim Palace by various Dukes of Marlborough.  Early paintings by Titian, Van Dyck, Stubbs, Gainsborough and Reynolds show a small dog with flat head, high-set ears, almond eyes and a rather pointed nose.

By the mid-19th Century, the breed had been altered to a dog with domed skull, long, low set ears, a retrousse nose and undershot jaw and large, round eyes.  A number of Landseer paintings document the changes and by 1900, the English Toy Spaniel was a distinct type.

In the mid-1920’s an American named Roswell Eldridge traveled to England only to be dismayed that he could find none of the old type “nosy” spaniels seen in the early paintings.  He offered a prize of 25 pounds annually for five years at Crufts Dog Show to the persons who presented the dog and bitch “as shown in the picture of King Charles II’s time, long face, no stop, flat skull, not inclined to be domed and with the spot in the center of the skull.”  A few people accepted the challenge, one of them being Amice Pitt who took up the stewardship of the breed and influenced its development for 50 years.

revival of the breed did not go so far as to return to the small eyes and snipey muzzle, opting for a softer, gentler look.  A club was formed on the second day of Crufts in 1928 and a standard drawn up using the dog winner “Ann’s Son” as a model.  There was little support for this renewed breed but the dedicated breeders persisted and in 1946 they were given separate registration status and the first set of C.C.s was awarded.  The breed grew in numbers until it was the number one toy breed in England and remains so to this day.

In 1952, the first Cavaliers were sent to America for Mrs. W.L. Lyons Brown as a present from Lady Forwood.  In 1956 a club was formed in America and soon after sought AKC recognition, but due to small numbers was relegated to the Miscellaneous Class until the breed “grew up” a bit in this country.

In 1962, Gertrude Brown (Mrs. Lyons Brown’s sister-in-law) took over as patroness of the breed and the first specialty show was held at “Sutherland,” her home in Kentucky.  Trudy Brown-Albrecht remained the breed’s  guiding light until her death in 1983.  Entries and membership in the club grew to the point that specialties attracted entries of 100 – 300 Cavaliers.

In 1993, the club declined the AKC’s invitation to become the parent club.  With recognition imminent for the breed, the American Cavalier King Charles Spaniel Club was founded in 1994 by a group of dedicated breeders and exhibitors interested in continuing to work toward improving the breed while also providing the breed the opportunity to participate fully in all-breed conformation competition, obedience trials, agility and tracking tests, canine good citizen tests and all other activities sponsored by the American Kennel Club.  The club was organized by people whose combined experience represents many decades of successful breeding, showing and judging of Cavalier King Charles Spaniels as well as other breeds.